L.A. Woman is a challenging, yet wonderful record that feels like it was created by two completely individual entities.  The first being a somewhat uninspired and bored Jim Morrison, who still sounds great at certain moments (his involvement consisted of stepping into a bathroom recording studio infrequently throughout the sessions, only to lay down his vocal tracks). The second, a band who set out to prove that they were, in fact, worthy of their own individual praise – aside from the shadow cast by their ever-popular frontman. Overall, this is still an outstanding album (especially when assessed next to other artists – separately from Morrison Hotel or their near-perfect eponymous debut).

As previously mentioned, the most surprising elements of this album exist in the amazing musicianship found on each of the ten tracks.  While Morrison’s vocals are irreplaceable, The Doors sound as good or even better on L.A. Woman than any other professional studio musicians who worked during that time period (i.e. The Wrecking Crew).

“The Changeling” is a groove-centered cut that weaves around a bass and keyboard riff that perfectly supports Melissa’s most electrifying vocals on the album.  The chorus takes quite the turn (is this what he meant by “The Changeling” from the title?) as the rhythm changes, followed by a bridge with a slow build-up and resonating apex. By the end of “The Changeling”, you’re definitely stomping your feet and rocking your head in soulful accordance.  This song stands out as one of the best on L.A. Woman.

While being one of the most popular songs on the record and in the band’s catalog, “Love Her Madly” sounds just as relevant and exciting in 2013.  Morrison croons gently (with plenty of effects laced atop his vocals) over the great backing of Manzarek’s skillful organ (that feels like a Western saloon serenade), Densmore’s simple drums and Krieger’s crafty guitar work (consisting of that signature upstroke riff).  “Love Her Madly” shows hints of the 60s hangover while looking forward with superb production quality.

Aggressive vocals and a heavy bass riff kick off the third track on Side I – “Been Down So Long”.  This bluesy number includes more swagger and soul than anything produced after 1980 while proving to be one of the best tracks on the record. During the momentary lapse in vocals,  Krieger grabs a slide to showcase his underrated guitar skills and Densmore shows off his impressive stick handling.  Morrison also sounds almost as good here as he does on “Roadhouse Blues”.

Four fifths of the way through the first side of the album, The Doors break into a slow rhythm and blues number called “Cars Hiss By My Window”.  This fairly standard 12-bar blues is a nod to traditional blues standards – lacking really any effort from The Lizard King and seeming more like a setup for the next song than an actual attempt at anything creatively appealing.

“L.A. Woman” closes out the first half of the similarly named album with one of the most famous intros of any song from the early 70s.  Morrison’s sloppy bathroom vocals contrast, yet compliment, the extremely tight backing track from the rest of The Doors until he breaks into the memorable chorus.  Clocking in at 7:49, this cut includes plenty of riffing, solos and jams to be considered historical proof of this band’s excellent musical abilities.  Although, cutting out the extra content (about 3 minutes worth of jamming) would have made this lengthy track a legendary rock classic without any faults.  I can imagine this track reaching its peak enjoyment level on a long drive up Santa Monica Blvd. with the windows rolled down on a summer night in L.A. 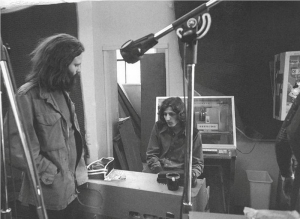 Side II is much stranger than the first. Part two starts off with one of the strangest songs by The Doors, “L’America” is haunting and mystifying – introducing a very different vibe for the second side.  A marching drum beat carries the listener headstrong into Morrison’s vocals that don’t really seem to go anywhere…until the chorus.  “L’America” is interesting but doesn’t quite fit in with the rest of the record. This cut resembles what a Carlos Castaneda novel would sound like put to music.  Seemingly, the bridge gives you reason to come back at a later time and give it another go.

“Hyacinth House” brings you back with an uplifting melody and welcoming keyboard part (sounding like a resonating church organ).  This song carries the listener along a journey perfect for awakening on a Sunday Morning.  Even though that music was written by Krieger, Morrison’s lyrics suggest finding something new in life – i.e. Jim’s immediate exit to Paris following the album’s completion.  An enjoyable track that feels like the calm before the storm…

One of the few covers ever recorded by the band, “Crawling King Snake” slithers along, as the name suggests.  This old blues standard puts Manzarek’s organ and Krieger’s trademark Gibson SG guitar sound front and center as the rest of the studio band crunches and attacks the empty space.  Although the lyrics are not his own, Jim seems to be relating directly to the reptilian themes found within the words (just as The Lizard King should).  It’s a great blues number, played by a band that idolized the blues and can pull it off as well as anyone.

“The WASP (Texas Radio and the Big Beat)” contains lyrics that were taken from one of Morrison’s poems – which is most likely obvious considering that most of the words are spoken, rather than sung.  While being intriguing, it seems like more of a piece of history than something a listener would want to return to.

Distant echos haunt this track.  Thunder and rain provide a chaotic backdrop.  The melody is unforgettable and the musicianship is unmatched.  Manzarek’s organ solo is intelligent and beautiful, while falling down like raindrops as it crescendos into another verse.  Elvis’ bass player, Jerry Scheff, lays down one of the most famous bass lines in The Doors discography. Morrison sounds unbelievable on this song – youthful, aggressive, confident, frightened and frightening all at the same time.  This “swan song” is the perfect ending to an amazing band that created an inspiring final album (at least, the final album with their singer) that is completely forward-thinking.

I can see Jim leaving the studio during the last few minutes of this track – leaving his band to make the final statement as he boards his plane to Paris.

Recommended if you like: Morrison Hotel (by The Doors), The Coral, blues, L.A rock and early 70s music

A Blog By: Kenneth Bringelson